An illustration of the upgraded Antares 330 rocket. Credit: Northrop Grumman

Northrop Grumman announced it is teaming up with Firefly Aerospace to create an upgraded version of the Antares rocket following supply disruptions caused by Russia’s war in Ukraine.

Firefly Aerospace, which is currently developing its own line of rockets starting with a small satellite launcher called “Alpha,” is expected to build the first stage of this new upgraded Antares 330 rocket. Northrop Grumman will provide the avionics and software as well as the upper stage of the vehicle.

“Through our collaboration, we will first develop a fully domestic version of our Antares rocket, the Antares 330, for Cygnus space station commercial resupply services, followed by an entirely new medium class launch vehicle,” Scott Lehr, vice president and general manager for launch and missile defense systems at Northrop Grumman, said in a company press release. “Northrop Grumman and Firefly have been working on a combined strategy and technical development plan to meet current and future launch requirements.” 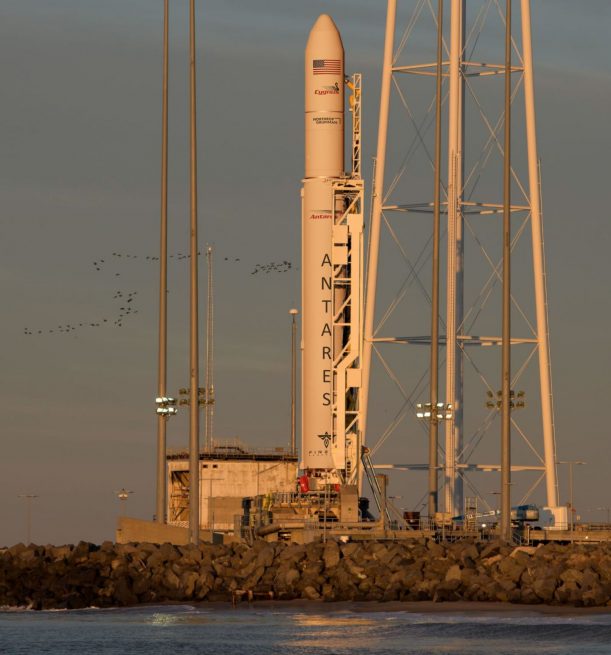 The Antares 330 rocket is also expected to use the same launch pad as previous versions, Pad 0A at Wallops Island, Virginia. Credit: Northrop Grumman

Antares’ primary purpose since its inception in 2013 has been to send Northop Grumman’s Cygnus cargo resupply spacecraft to the International Space Station. Over the years, there have been several upgrades to the rocket, increasing its capabilities.

When Russia invaded Ukraine in February 2022, it quickly became clear that there would be no more shipments of the stage and engines because of the war, as well as the multitude of sanctions imposed on Russia by the international community.

In fact, Northrop Grumman confirmed the company only had enough supply for two more Antares 230 launches — one in October 2022 to send the NG18 Cygnus spacecraft to the ISS and another as early as February 2023 to send NG-19 Cygnus to the space station.

The new Antares 330 first stage will use Firefly Aerospace’s composites technology and use seven Miranda engines powered by liquid oxygen and rocket-grade kerosene propellants. Northrop Grumman is expected to integrate the final vehicle at its Wallops Island, Virginia, facility, as it has for all previous Antares rockets.

According to Northrop Grumman, the new first stage will “significantly increase Antares mass to orbit capability.” It will also allow the company to continue with its current contract to resupply the International Space Station, but also allow it to plan for future mission capabilities.

There are several unknowns, however. For example, Northrop Grumman and Firefly Aerospace did not give any cost estimates or timelines for the development of the upgraded rocket, a process that could take years.

Firefly Aerospace is currently developing its Alpha rocket, which is a much smaller rocket than Antares. To date it has only launched once, which resulted in a failure during the first stage ascent. A second flight of Alpha is expected in the coming months.

After Alpha, Firefly Aerospace is expected to build “Beta,” which is a media-class launcher that also has a first stage using the Miranda engine design. Beta isn’t expected to fly until at least 2024.

Additionally, NASA awarded Firefly Aerospace a contract in 2021 to send small payloads to the surface of the Moon using its Blue Ghost lunar lander. That mission also isn’t expected to happen until at least 2024.

According to Joey Roulette Reuters, to give additional time for development of the Antares 330 rocket, Northrop Grumman plans to purchase three Falcon 9 rockets to send the company’s Cygnus spacecraft to the International Space Station.

Are all astronauts eligible for Artemis moon missions?