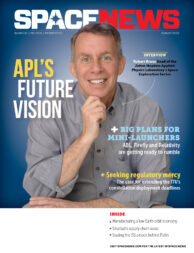 Before taking on his new APL duties, Braun was director for planetary science at NASA’s Jet Propulsion Laboratory.

Braun brings a wealth of space technology expertise and organizational skills to APL, having served as NASA’s first Chief Technologist. Before that, he was Dean of the College of Engineering and Applied Science at the University of Colorado Boulder and a faculty member at the Georgia Institute of Technology.

There’s no shortfall of APL missions that Braun is now championing. Currently in operation are the Parker Solar Probe, the Double Asteroid Redirection Test (DART) that will showcase planetary defense technology, and New Horizons, which flew past Pluto in 2015 and continues to cruise onward. Future missions within APL’s portfolio include Europa Clipper to Jupiter, Dragonfly to Saturn’s moon Titan, and the Interstellar Mapping and Acceleration Probe (IMAP).

SpaceNews correspondent Leonard David interviewed Braun to find out what’s on his agenda as he scopes out his vision for APL.

Given your career path before your APL job, what focus do you want to bring to the lab?

I’ve had a number of different experiences over the course of my career and have learned from each and every one of them. What I’m hoping to bring to this existing role at APL is to apply all those lessons learned and experiences to lead the space sector forward.

The space enterprise at APL is a little under 2,000 people. My message is that we’re open for business. We’re a trusted government partner, and we’re making critical contributions in both civil and national security space domains. We had nine different flight deliveries in this last year, a record for the sector.

How do you foresee the future of APL’s space sector?

What we’ve decided to do is something like a decadal survey. We’re in the midst of a strategic visioning process in each sector. We are thinking about where we want to be in 10 years and how we get there? Now is a good time to take stock of where we are and determine who we want to be and what’s the right path forward for the sector and the lab in service of the nation. And that’s exactly what we’re doing.

Anything specific that you see as potential growth areas?

Not in any priority order, there are at least four areas of strength at APL that I think we can build off of when we think about the future. Space weather, astrobiology and the search for life in the solar system and elsewhere, cis-lunar for both civil and national security reasons, and the fourth is planetary defense.

It seems like we’ve entered an open aperture on smallsat development and the many uses they can provide. What’s your view?

Yes, smallsats are a big part of our nation’s future in space. APL has been contributing in that area. We have a large number of successful smallsat missions, largely on the technology side for national security sponsors. We’re also taking those same concepts and applying them now in the civil space domain. One example would be our NASA Electrojet Zeeman Imaging Explorer (EZIE), which involves three smallsats to characterize the electric currents that link Earth’s aurora to the planet’s magnetosphere. There’s nothing ‘EZIE’ about this mission. We just had Preliminary Design Review and passed Key Decision Point-C, with flying colors.

I think the capability of smallsats for Earth observation, navigation, communications, and even proximity operations will only grow. This is something that APL is keenly focused on. Most of the missions that we’ve done have been in support of national security objectives. From an APL perspective, I think you will see more and more of our missions, both in the national security space and civil space arena, being small spacecraft. That’s mainly because electronics just continue to miniaturize. Pretty soon, a 12U smallsat is going to be thought of as a big spacecraft!

Are you concerned about moving technology that APL has matured on classified missions to an unclassified use?

In my view, this insight and experience benefit all government sponsors. Technologies can move back and forth between civil and national security space, or we can leverage investments across each area.

Any examples you could flag?

The heat shield technology used for the Parker Solar Probe came out of some national security missions. The DART is another example. Basically, it is a bullet hitting another bullet. Some air and missile defense personnel and technologies here at APL joined forces with our space folks to create that mission which is the first test of planetary defense.

How do you envision APL tapping your talent concerning your work on entry, descent and landing (EDL) concepts? Is that an area that could be looked at by your APL team?

Absolutely. Of course, the biggest EDL activity at APL right now is the Dragonfly mission to Titan. I wouldn’t call it EDL. I’d call it entry, descent and flight. EDF is perhaps a better acronym for us. Dragonfly is a rotorcraft, roughly the size of the Perseverance rover now on Mars. It flies right out of the backshell, goes to its first landing spot, and explores there, followed by many more liftoffs, flights and landings across the surface of Titan.

How about other avenues beyond your Titan adventure?

I’m a big advocate for looking at low-cost Mars exploration, both orbital and landed concepts. I think there’s a lot that the community could put forward from a science perspective. I think there are scientifically viable and compelling Mars missions that could be done for much, much lower cost than the missions currently in development or in consideration.

Mars is difficult to reach due to planetary alignment once every 26 months. I think low-cost at Mars is maybe a little bit different than low-cost at the moon or low-cost in low Earth orbit.

Isn’t there an issue about what scientists want, what engineers can deliver, and at what cost?

If you want to bring missions in on cost, you must curb your appetite. You can’t turn missions into Christmas trees, adding every instrument conceivable. You have to have a more streamlined approach and willing to take de-scopes and realize that this ship is not the last ship out of town. It’s just the last ship today out of town, and there will be a follow-on mission where other science objectives can be accomplished.

In my recollection, APL has been characterized as a threat to JPL, in terms of competition. So how did moving between the two institutions strike you?

I’ve heard things like that in the community as well. I don’t really subscribe to that thinking. JPL is a great place and JPL is JPL. APL is a great place and has no intention of being JPL. APL is not a NASA center. We have no reason to want to be someone else. We don’t need to be NASA Goddard and we don’t need to be JPL. We need to be the best version of APL that we can be. The idea of partnering with NASA or its centers or various universities or industry are all things that we’re looking at, across a range of opportunities. Also, in almost all of our missions, we have international partners.

APL has a very active role in plotting issues in NASA’s rebooting of the Moon. How is that work moving forward?

APL’s Lunar Surface Innovations Consortium operates in collaboration with the NASA Space Technology Mission Directorate under the Lunar Surface Innovation Initiative. Hundreds of organizations are part of that consortium that NASA now has access to through APL. It’s a good model in which APL is also actively engaging with small businesses and universities that, perhaps, don’t have the expertise to fly technologies in space. We’re marrying some of the best ideas from innovators from all around the country to solve some of NASA’s challenges. It’s a fascinating model and I think it’s one that will pay dividends.

I think we could do a similar thing in other areas, in space weather, planetary defense and frankly, for Mars exploration.

This interview has been edited for length and clarity.

This article originally appeared in the August 2022 issue of SpaceNews magazine.