Friends and family have often reported that when they can’t sleep they read a book, listen to music, and search for reruns of Seinfeld or the classic The Invaders TV series. I was faced with what to do early Sunday morning (11 Dec) as sleep was just not happening. Then at about 1:15 am I received a Facebook alert that the upcoming SpaceX Falcon 9 launch was scheduled for 2:38 am EST. I had not planned on staying up to watch the launch on the internet. But being wide awake created what I thought was a crazy idea in my mind.

Why not go see the launch in person? There was still plenty of time to make it to Cape Canaveral from my home. I weighed the pros and cons. The first thing I checked was the weather and there was a 90% probability for favorable conditions at launch. Of course, there was always a chance for a technical delay. So, what was the worst that could happen? I go out there and I don’t see a launch. The alternative was to sit at home and not sleep and I decided to go for it.

I quickly assembled everything I needed including my camera and I was on the road at 1:40 am. There was very little traffic on I-95 and SR 528 as I headed toward Cape Canaveral. My destination was the Rocket Launch Viewpoint just before the entrance to the Cape Canaveral Space Force Station (see map). 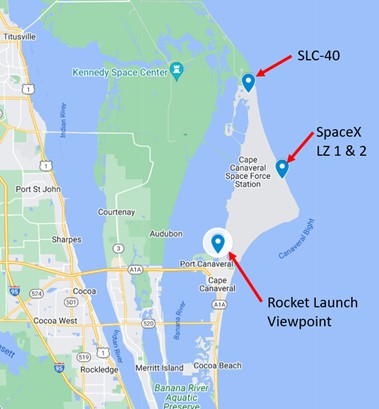 This location has bleachers set up and it sits across SR 401 from the Sands Space History Center and SpaceX’s Launch Control Center. I never viewed a launch from this location, but I heard it was a good spot because of direct line of sight with the pad at SLC-40.

Approaching the viewing site, I was stopped by a police officer who directed me to a makeshift parking lot on the grass. I didn’t know what to expect in terms of a crowd at that early hour but based on the police presence they were ready and had things managed very well.

I parked and made my way to the bleachers and took a seat at around 2:15 am, just 23 minutes before launch. I estimate about 200 people were there.

As I settled in I turned on the SpaceX Launch feed to hear the preparations as the countdown proceeded. The SpaceX Falcon 9 would be carrying ispace’s HAKUTO-R Mission 1 and NASA’s Jet Propulsion Laboratory’s Lunar Flashlight to a lunar transfer orbit. The mission had been delayed several times over the past few weeks, but everything was nominal as T-0 approached. The Hakuto Mission 1 is a privately led Japanese mission to land their Series 1 lander on the Moon (see diagram). The Mission 1 Lunar Lander is small and lightweight and designed to perform a soft landing on the Moon to test the concept. The landing is scheduled for March 2023 after several months of operational testing in lunar orbit. A successful landing would mark the first successful commercial delivery of payloads to the Moon.

JPL’s Lunar Flashlight (see image below) is a very small satellite that will use infrared lasers and an onboard spectrometer to map ice near the Moon’s south pole. It was exciting to know that these payloads were headed to the Moon. A number of people were listening to the feed as the commentator announced the payload, and when she mentioned the Lunar Flashlight a group of people near me started cheering. 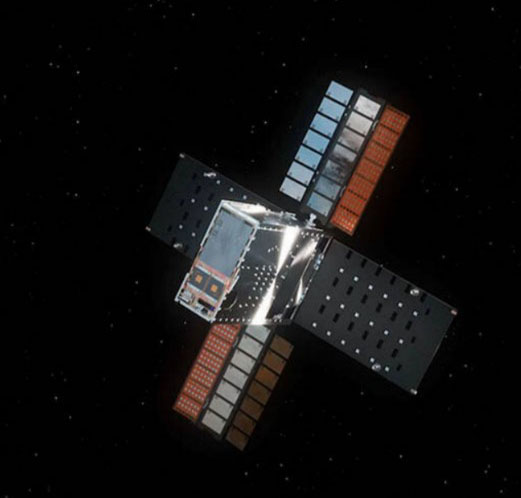 Several were wearing NASA branded shirts and sweatshirts, so I decided to strike up a conversation and I asked if they were connected to the Lunar Flashlight project. A few responded in unison that they were part of the JPL project team and they were there to see the launch. It was great to speak to them and it really added to my own experience by connecting with people who were part of the project.

They also asked me several questions about the launch and what to expect. I cautioned them the feed is typically 20 to 40 seconds behind real time and when the countdown reaches T-1 minute to watch the pad, not their phones. It’s easy to miss the launch if you don’t look up until the countdown hits zero. And it was a beautiful launch as the light produced by the 9 Merlin engines illuminated the whole pad.

We followed the rocket’s trajectory and because it was so clear we could see the sky ballet (see photo below) performed by the first stage as it separated and began its descent and the second stage as it continued to space. It was difficult to know exactly where the first stage was as it descended, but occasionally it fired its engines to slow down which gave a good idea of its decent path. 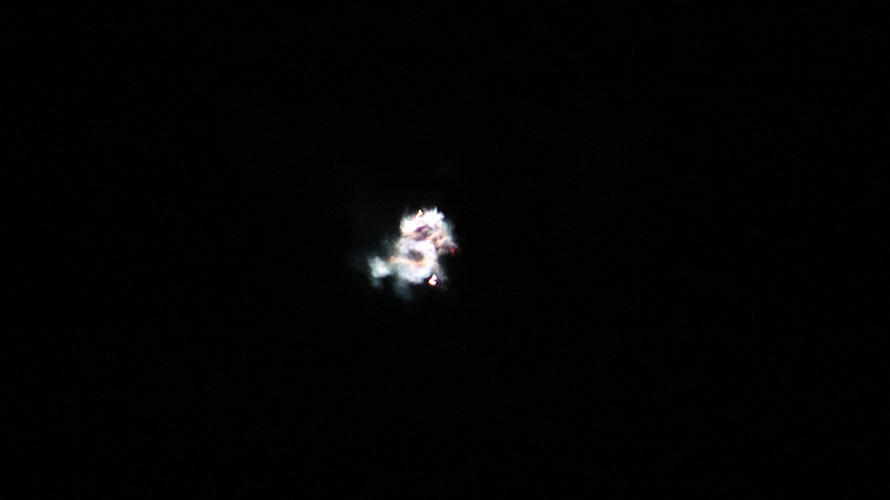 It came down fast and then finally it fired its engines to make a soft landing. We could see it clearly and then it went behind a treeline (see photo below) that blocked our view of the landing itself. It was at that point I said, “we should be hearing the sonic booms any second.” It was perfect timing as 1 second later we heard the crackling sonic booms. 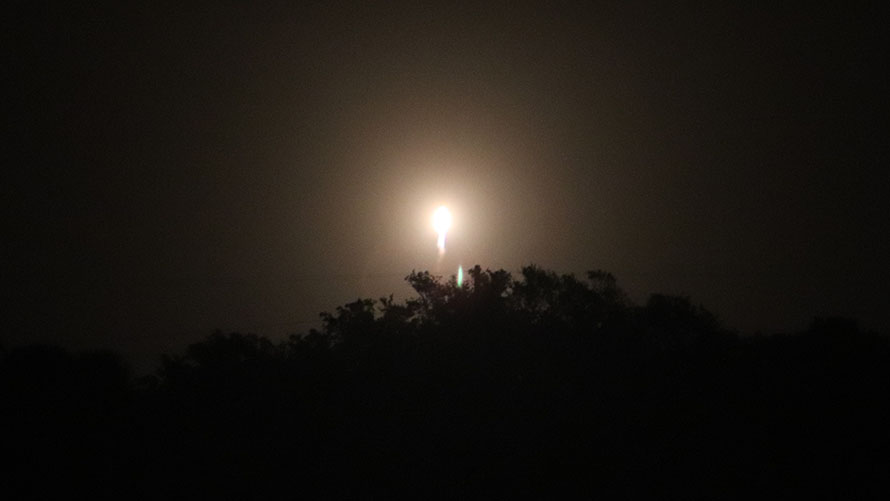 There was a lot of cheering and hand clapping as we started to gather our things and disperse. I congratulated the Lunar Flashlight team and wished them great success with the project. When I made it to my car and took a moment to reflect on what I had seen and I felt so good. Rocket launches (and landings) will never get old. I made it home by about 3:30 am, less than two hours after I left. A rocket launch is not a cure for insomnia, as I was wide awake. But it sure beats watching reruns on TV.

Snowy Lapland and the white balloon