Once in space, the Falcon 9 rocket deployed the 750-pound (340-kilogram) lander as well as a secondary payload from NASA’s Jet Propulsion Laboratory about 47 minutes and 53 minutes into the mission, respectively. They were both placed into a ballistic lunar transfer trajectory.

Meanwhile, the first stage of the Falcon 9, core B1073, successfully returned to Landing Zone 2, located several miles south of the launch site. This was the fifth successful landing for the booster, which will be refurbished and used again on a future mission.

This launch sets up the Japanese company to potentially be the first private organization to successfully soft-land on Earth’s nearest celestial neighbor. Because of the much-longer travel time of the ballistic lunar transfer trajectory, it’ll take about four months for the lander to reach the Moon. Touchdown is expected in April 2023 in Atlas crater which is located in the northeastern part of the Moon’s Earth-facing side. 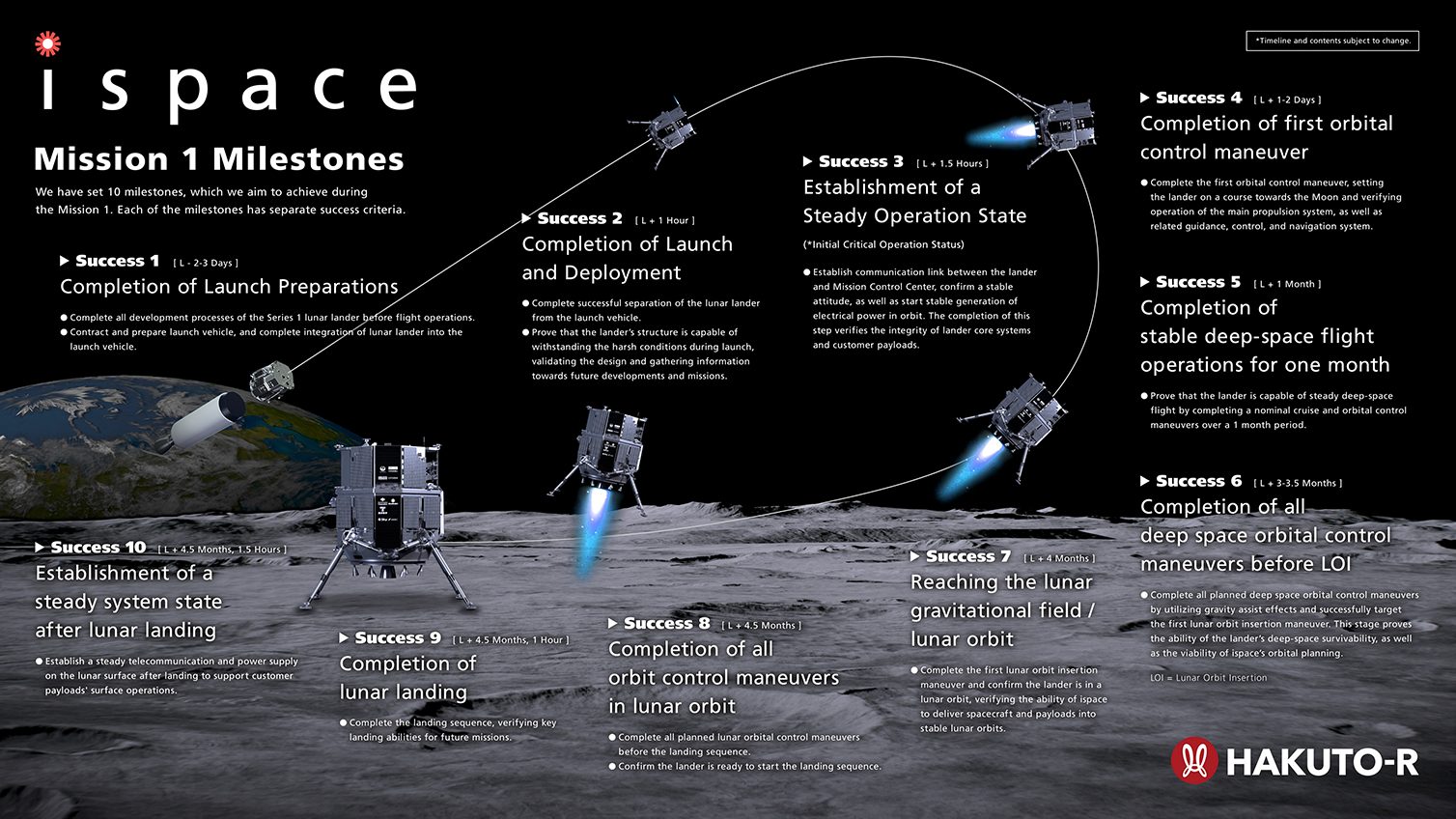 A graphic covering the mission goals of the first Hakuto-R landing. Credit: ispace

Falcon 9 also carried the Lunar Flashlight CubeSat to the Moon for JPL as part of the Artemis program as a commercial lunar transportation service. This NASA mission is a satellite that will shine lasers onto the Moon’s surface to search for evidence of water ice.

This Hakuto-R mission one aims to lay the groundwork for future transportation with mission two landing another “Series 1” lander on the Moon’s surface in 2024. Missions 3-9 are expected to focus on establishing the lander as a high-frequency, cost effective mode of transportation to the lunar surface.

Among the payloads aboard the M1 mission is a small lunar rover called Rashid, which was developed by the United Arab Emirates. This rover has two high resolution cameras, a microscopic camera and a thermal imaging camera along with a probe that determines electron temperature and density.

An evolved lander called “Series 2” is expected to land NASA experiments on the surface of the Moon as early as 2025 or 2026. The Japanese company is partnered with U.S.-based Draper, which has a Commercial Lunar Payload Service program contract to send payloads to the far side of the Moon.