In the dark of night, NASA’s long-delayed Artemis 1 Space Launch System rocket finally took to the skies to send an uncrewed Orion spacecraft to the Moon.

Liftoff took place at 1:47 a.m. EST (06:47 UTC) Nov. 16, 2022, from Launch Complex 39B at Kennedy Space Center in Florida. This was roughly 43-minutes into a two-hour window available for today’s attempt. The rocket reached orbital velocity roughly 8.5 minutes later and deployed the upper stage — the Interim Cryogenic Propulsion Stage — and the Orion spacecraft. 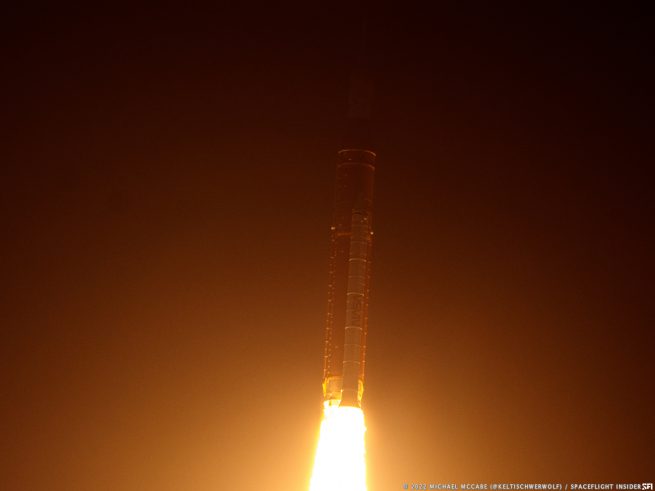 About 90 minutes after launch, the ICPS propelled Orion onto a translunar trajectory following an 18-minute burn. Orion separated shortly after to fly to the Moon.

“What an incredible sight to see NASA’s Space Launch System rocket and Orion spacecraft launch together for the first time,” said NASA Administrator Bill Nelson. “This uncrewed flight test will push Orion to the limits in the rigors of deep space, helping us prepare for human exploration on the Moon and, ultimately, Mars.”

Liftoff came more than two months after the first attempt to get the Artemis 1 mission off the ground. The Aug. 29 attempt was ultimately called off because of a faulty sensor on one of four engines on the SLS core stage to verify it was properly conditioned for launch.

It turned out the engine, No. 3, had a number of other potential witness sensors to verify temperatures, so the agency could continue with another attempt without rolling back to the Vehicle Assembly Building.

The second attempt came on Sept. 3. This time, there was a large hydrogen leak on the Tail Service Mast umbilical plate where liquid hydrogen flows into the rocket. That prompted a scrub and necessitated a repair of the seal on the pad.

The seal, located on an eight-inch quick disconnect plate, was replaced in early September. NASA then performed a tanking test on Sept. 21 to verify the seal and test a modified “kinder, gentler” loading process. 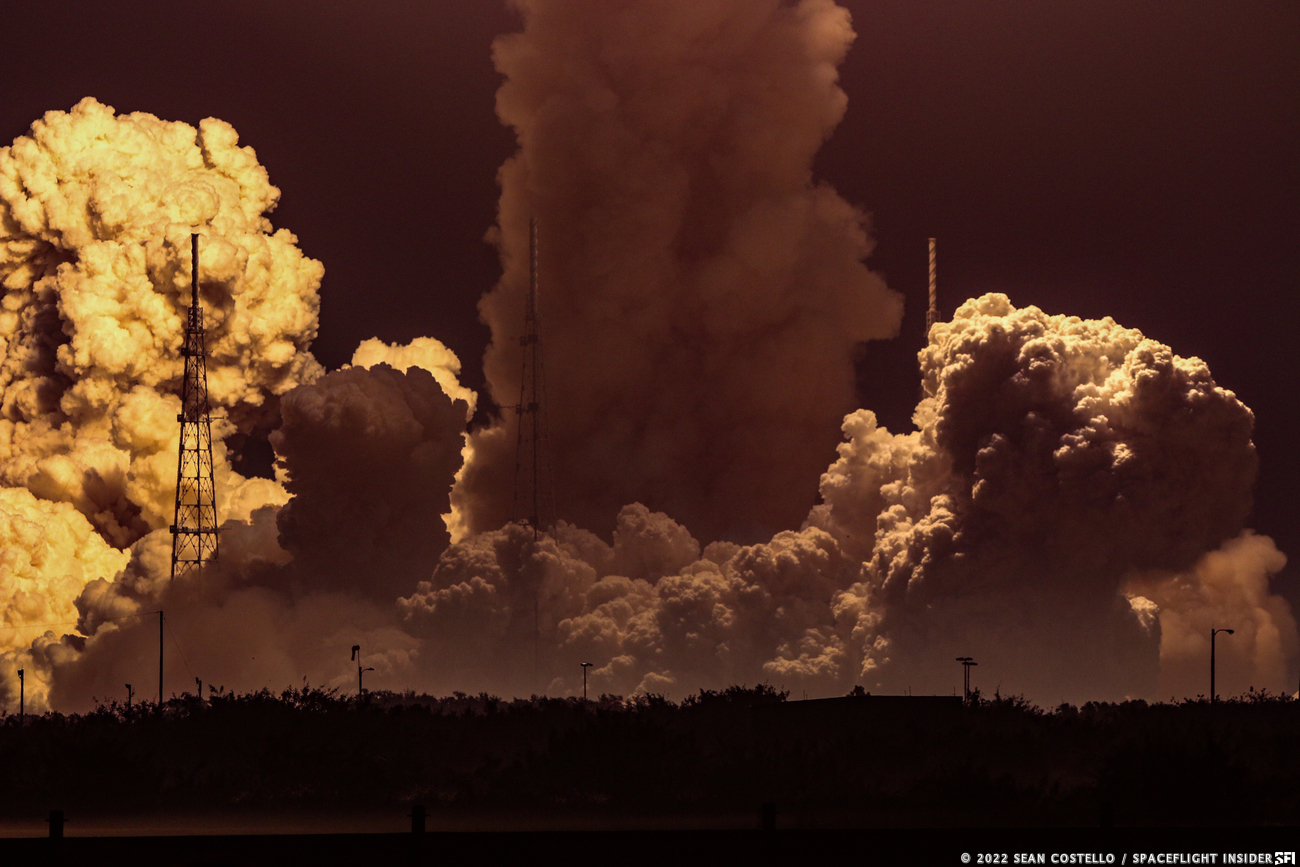 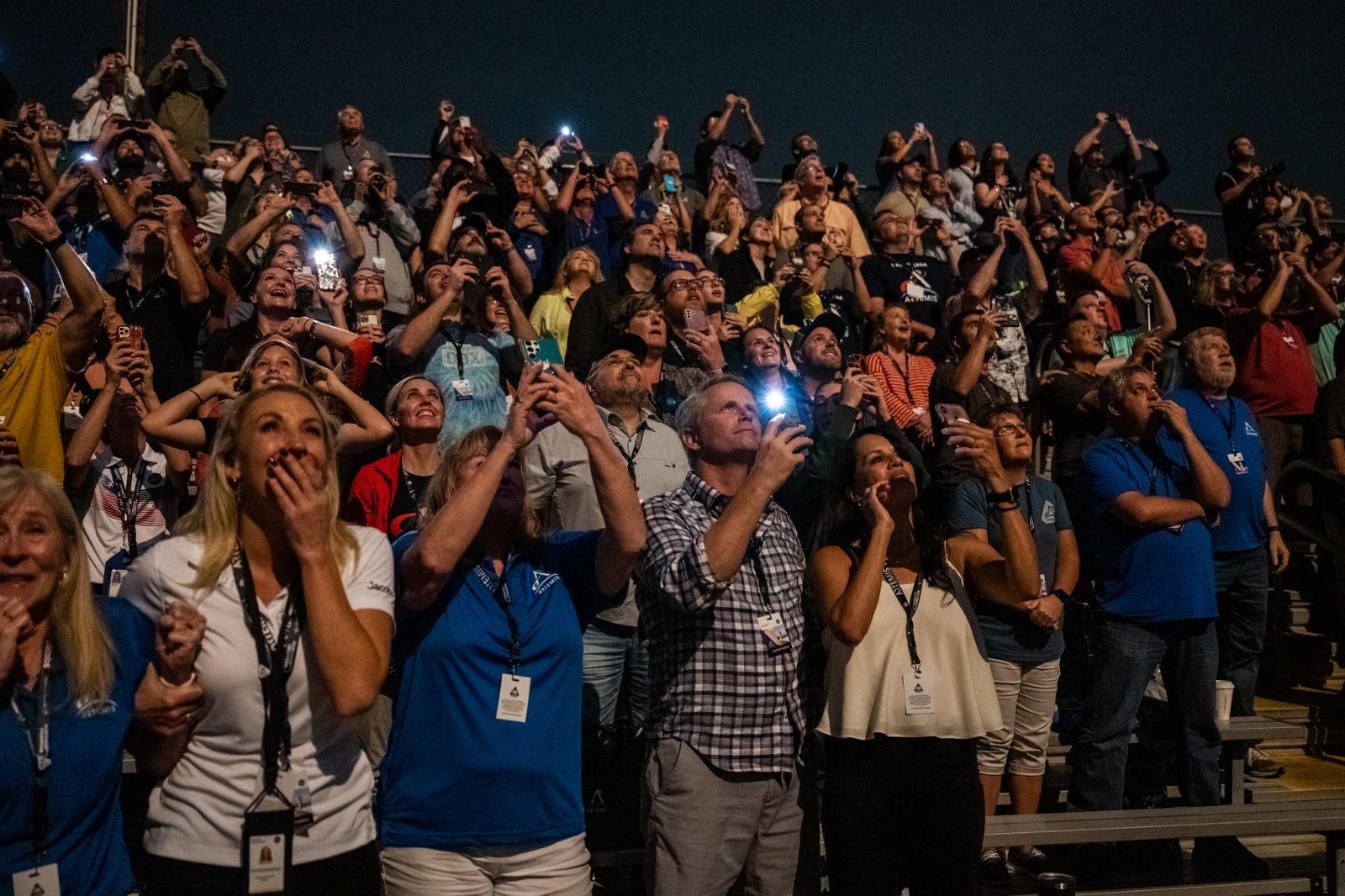 In late September, days after the tanking test, a powerful hurricane, Ian, prompted NASA to return the rocket to the safety of the VAB, eliminating any chance to launch in September or October. 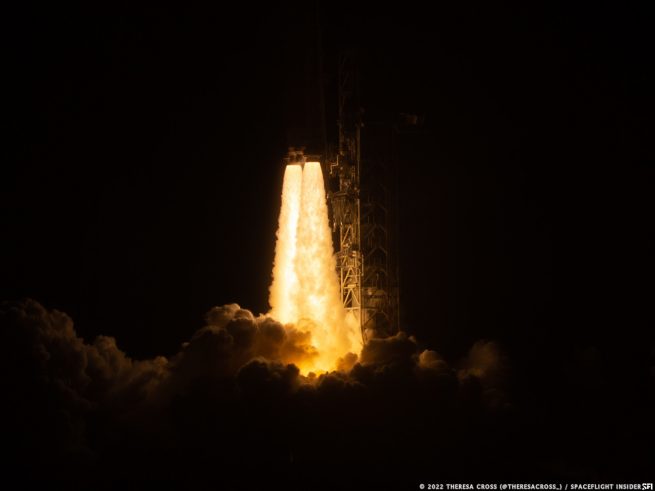 Nicole made landfall early in the morning Nov. 10 about 70 miles (113 kilometers) south of Kennedy Space Center. According to NASA, the rocket never exceeded its wind speed limits, which was about 85 miles (137 kilometers) per hour. There was still minor damage to the rocket that needed to be addressed, though.

In particular, a strip of caulk on a seam on Orion’s launch abort system had come loose during the storm and there was some analysis on potential risks should more become detached during launch. NASA said the mission management team determined additional material tearing off during launch would have a low likelihood of posing a critical risk to the flight.

Teams also replaced an electrical connector on the hydrogen tail service mast umbilical that was showing inconsistent data. NASA said while that didn’t completely solve the issue, “engineers have redundant sources for the information provided through the connector and it is not an impediment to launch.”

With those issues addressed, there was nothing stopping the agency from attempting launch on Nov. 16, which had a 90% chance of favorable weather — the best of all three attempts.

This time the countdown continued relatively smoothly until about 3.5 hours before launch when an intermittent leak was detected on a hydrogen valve inside the mobile launcher.

This prompted a pause in hydrogen flow, which was already in toping mode by this point in the countdown.

NASA then sent a three-person “red crew” (two technicians and a safety representative) to the pad, inside the hazard zone, in order to go inside the base of the mobile launcher to tighten nuts on the core stage hydrogen replenish valve. This took about an hour. 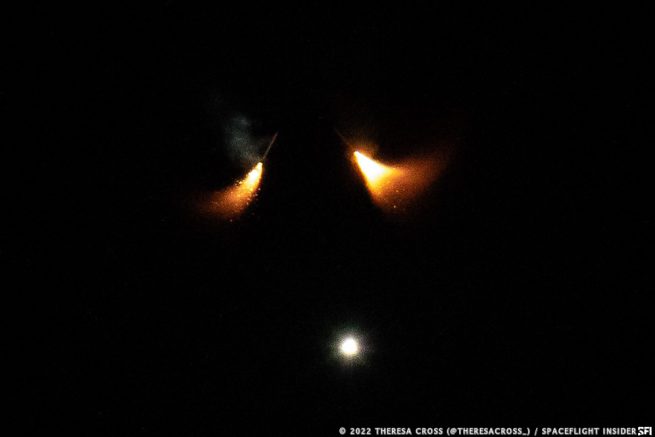 According to NASA, the agency “has historically sent teams to the pad to conduct inspections during active launch operations, as needed.”

During the process of tightening nuts, liquid hydrogen began to slowly boil off in the core stage tank, reducing it from 100% to about 97% full. This required the tank to be re-topped off after the red crew completed their work, pushing the launch 43-minutes into the two-hour window.

A few minutes after the leak was fixed, the Eastern Range reported a no-go due to a loss of signal on a radar site. Fixing the radar required the replacement of an ethernet switch, which NASA said took some 70 minutes.

Now that the Artemis 1 Orion spacecraft is in space, it should reach the Moon on Nov. 21 to perform an outbound powered flyby and put it on a course to reach a distant retrograde orbit around Earth’s nearest celestial body on Nov. 25.

Ultimately, this mission is slated to last about 26 days before Orion returns to Earth, splashing down in the Pacific Ocean off the coast of San Diego on Dec. 11. 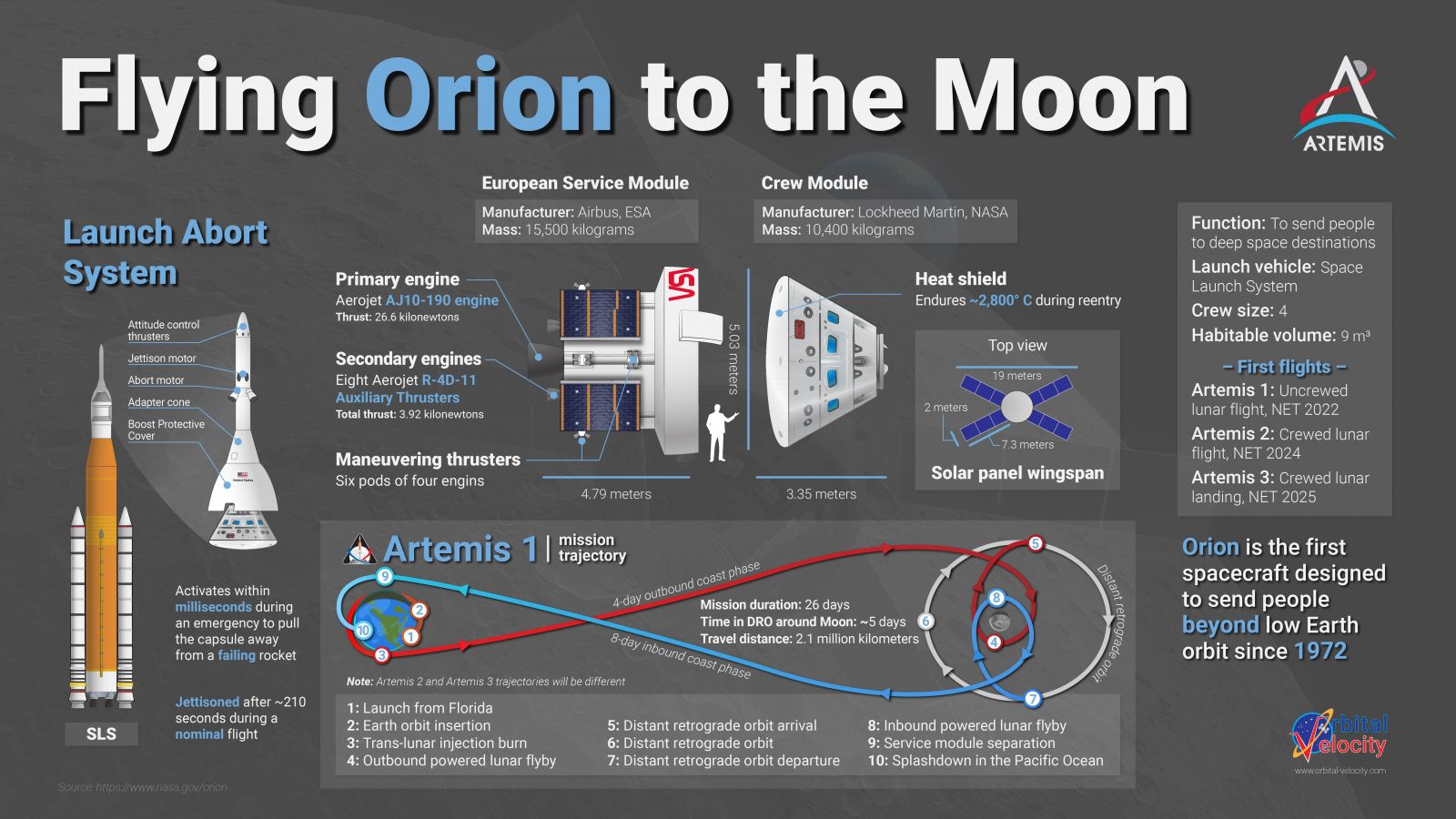 At liftoff, the SLS produced a thrust of 8.8 million pounds, the most of any NASA-built rocket launched to date, dethroning the Saturn V, which held the record at 7.8 million pounds for five decades. 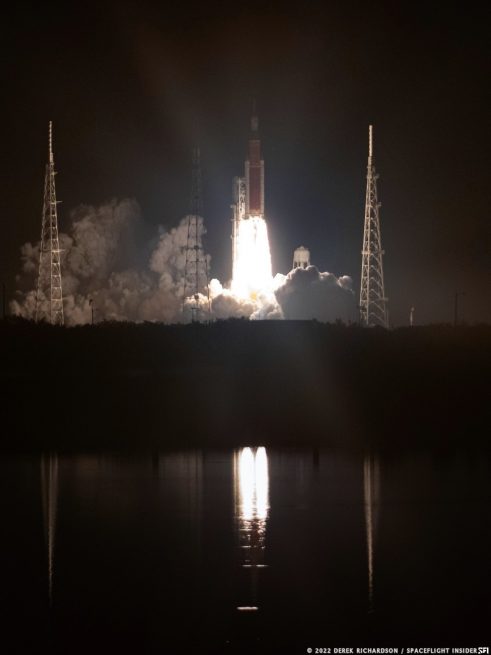 The Artemis 1 launch reflects off of the water in the turning basin. Credit: Derek Richardson / Spaceflight Insider

Orion itself is a capsule similar in shape as the Apollo spacecraft, however, it’s larger — 13 feet (3.9 meters) versus 16.5 feet (5 meters) and can hold four astronauts, rather than the three of Apollo.

The mission will verify the systems of both the rocket and Orion spacecraft and provide vital information for the agency as it plans for crewed flights in the coming years.

The flight aims to test the core flight requirements of a crewed free-return mission to the Moon during the Artemis 2 mission in 2024.

Today’s flight is the first step towards paving the way to the future of space exploration. It’s the first spacecraft design for people to launch into deep space since Apollo 17 nearly 50 years ago.

Ultimately, the Artemis program aims to help humans learn to live in hostile conditions as NASA prepares to establish a sustained presence on and around the Moon. Under the program, the agency and its international and commercial partners plan to build an outpost called the Lunar Gateway, which will be stationed in a “near-rectilinear halo orbit” around the Moon.

The first mission to visit the Lunar Gateway, however, isn’t expected until Artemis 4 in 2026 or 2027. That mission will involve an upgraded, larger SLS rocket.

Eventually, NASA plans to use the Artemis program to help prepare the agency for human missions to Mars in the mid 2030s.

“It’s taken a lot to get here, but Orion is now on its way to the Moon,” said Jim Free, NASA deputy associate administrator for the Exploration Systems Development Mission Directorate. “This successful launch means NASA and our partners are on a path to explore farther in space than ever before for the benefit of humanity.”

Derek Richardson contributed to this story

50 years later, NASA is on the verge of sending people to the moon again : NPR