For Bessemer Venture Partners, March 1 was a red-letter day. Specifically, the letters S, P, A and C. In separate announcements only minutes apart on that Monday morning, two space companies that Bessemer had invested in, Rocket Lab and Spire, announced deals to go public through mergers with special-purpose acquisition corporations, or SPACs. The mergers would provide each company with hundreds of millions of dollars in cash and value them at billions of dollars.

That was big news for those companies and for investors like Bessemer, which owns 20.5% of Rocket Lab and 6.5% of Spire. “With Rocket Lab and Spire solving real problems for terrestrial businesses, Bessemer knows they have outgrown venture capital,” said David Cowan, a partner at Bessemer and a member of the board of Rocket Lab.

The SPAC boom has reshaped the space startup sector. Until recently, there was plenty of capital flowing into startups, thanks to funds like Bessemer, but few exits: means for investors to get the money back, plus a healthy return, through either an acquisition or an initial public offering (IPO) of stock. SPACs offer, in some sense, the best of both options: an influx of capital associated with going public, but without the overhead of a traditional IPO.

Rocket Lab and Spire are two of six space companies that have announced SPAC deals since October 2020 (a seventh, Virgin Galactic, went public through a SPAC merger in 2019.) With a surge in SPACs in the market in general, more such deals are likely in the months ahead. But some fear that SPACs could become too much of a good thing. 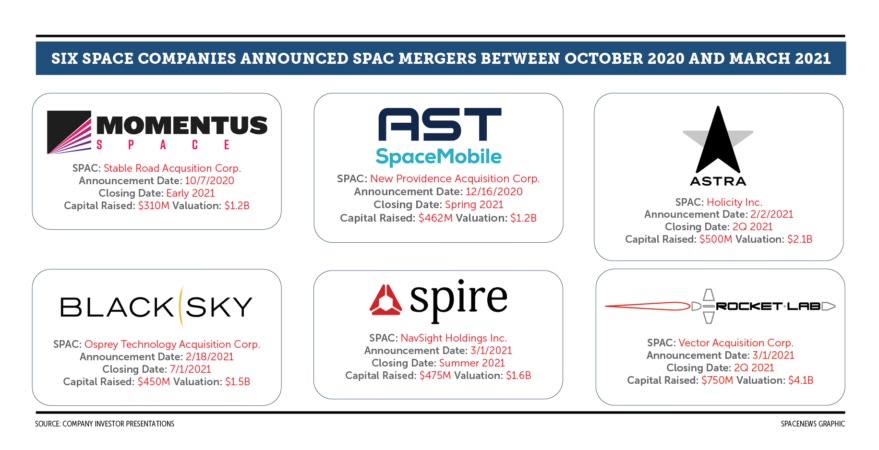 NOT JUST A BLANK CHECK

Rocket Lab was among the best positioned of space startups to seek an exit. The company had raised nearly $300 million in venture capital and used it to develop Electron, one of the leading small launch vehicles, as well as its Photon satellite bus. It had strong demand from both government and commercial customers.

“We had been moving at kind of a genteel speed toward an IPO for a while,” said Peter Beck, chief executive of Rocket Lab. What changed, he said, was the realization that, to meet future launch demand, particularly from satellite constellations, it needed a larger rocket than Electron. That led it to design a medium-class vehicle called Neutron.

Neutron would require a new round of capital for Rocket Lab, but getting that through an IPO could have taken the better part of a year. Rocket Lab expects its merger with Vector Acquisition Corporation to close in the second quarter. “For us, we really want to get cracking on an aggressive large program,” he said. “This acceleration is good for us.”

Even without a major new project like Neutron, Rocket Lab may still have needed to raise more funding. The company, which last raised $140 million in November 2018, reported having $48 million in cash in an investor presentation released with the announcement of its SPAC deal. That same presentation included a financial model projecting negative cash flow of $76 million in 2021.

Getting that capital was only one reason why Rocket Lab was looking to go public quickly. A second, he said, was to make it easier for “inorganic growth” through acquisitions. “We found it quite challenging as a private company to do the acquisitions that we want to do without having that public currency,” he said, although he didn’t identify specific companies or market sectors Rocket Lab was pursuing.

“We were approached by a lot of folks” interested in taking Rocket Lab public, Beck said. The company chose Vector — affiliated with private equity firm Vector Capital and not the launch vehicle developer Vector Space Systems — because of not just the funding but also the expertise the firm provided.

“After about two days of them working with us, we were already starting to talk about orbital dynamics,” he recalled. He cited the firm’s experience with acquisitions in particular as one reason to work with them on the SPAC deal. “It wasn’t just a blank check.”

For all the talk of SPACs being a faster way to go public, none of the six deals announced in recent months have yet closed. That includes Momentus, which announced in October that it would merge with Stable Road Acquisition Corporation, a SPAC created by Stable Road Capital. At the time the companies expected the deal to close in early 2021.

By early March, though, there was no sign a closing was imminent, and the deal had become something of a cautionary tale. Part of the problem was the issue with company co-founders Mikhail Kokorich and Lev Khasis, both Russian citizens. After the Defense Department raised concerns in January about the national security risks their ownership stakes posed, Kokorich stepped down as chief executive. In March, both Kokorich and Khasis placed their shares in a voting trust and planned to sell them within three years.

That would have been a problem for Momentus whether or not it merged with a SPAC; the Pentagon’s concerns prevented the company from getting an FAA payload approval for a January launch of its first Vigoride tug on a Falcon 9, forcing the company to postpone it to no earlier than June. However, thanks to the SPAC deal, all that played out in public in the form of filings with the Securities and Exchange Commission.

Those filings also showed that Stable Road has been sued by shareholders in New York state and federal courts, who claim that it filed “materially incomplete and misleading” documents about the Momentus deal with the SEC. The federal suit claims that the SEC documents omitted information about the net income projections for Momentus and didn’t explain why the companies agreed to reduce the valuation of Momentus from $1.8 billion to $1.2 billion. The cases are still pending. The SEC itself is investigating “certain disclosures” about the proposed deal, Stable Road said in a March 8 filing.

Even if a SPAC deal goes smoothly, the space company is now publicly traded and subject to the whims of the market. Virgin Galactic has seen its stock price soar and fall, and repeat that cycle, even though the company has yet to begin commercial service and has recorded effectively no revenue. Its shares tumbled in recent weeks when it announced another delay and when its chairman, Chamath Palihapitiya, sold his personal stake in the company.

That scrutiny may be too much for some companies. In January, Tom Markusic, chief executive of Firefly Aerospace, said his company was looking to raise $350 million. “I’m a bit apprehensive” about going public, he said when asked during a webinar if he’d consider raising that funding by merging with a SPAC. “I don’t know if I’d have the same sort of flexibility that I’d have with private funding.”

However, he added, “if that’s the most efficient way to get capital into the company, we’re certainly open to it.”

Ron Lopez, managing director of Astroscale U.S., the American subsidiary of Tokyo-based satellite servicing company Astroscale, said his company ruled out a deal with a SPAC because they’re not allowed in Japan. “That’s not to say we’re not interested in raising more money,” he said at the SmallSat Symposium in February. “But right now, SPACs are not something we’re going to seriously consider.”

For every company that might be reticent about merging with a SPAC, there are many more willing to accept the burdens and risks of going public in exchange for a large round of funding.

“It brings a whole new way of raising quite large rounds,” said Daniel Metzler, chief executive of Isar Aerospace, a European small launch company. Speaking on the same SmallSat Symposium panel, he argued it’s been particularly difficult in Europe to get investors to back space companies at the same level as their American counterparts.

With so many SPACs in the market, and many space companies seeking new funding rounds and exits for investors, more SPAC deals are likely in the months ahead. How long this boom lasts, though, is not certain.

“These things start off with a lot of bluster and a lot of hype. It’s just another tool in the toolkit for CEOs and CFOs to bring value to market,” said Lopez. “It’s right for some companies and not a good fit for others.”

“Are SPACs good for the industry? Yes, if the companies end up delivering on their pro-formas [financial projections] and their growth promises,” said Dylan Taylor, chairman and chief executive of Voyager Space Holdings. “If, however, we have some high-profile failures, it could turn investors off to space investment.”

For now, Bessemer is enjoying the twin success of the Rocket Lab and Spire deals. “The public markets have been waiting for a flagship name for the new space ecosystem in tech and revenue,” Cowan said. “Now they have two.

This article originally appeared in the March 15, 2021 issue of SpaceNews magazine.