While the launch of any space-going vehicle is a glorious spectacle, this particular mission was special. Safely nestled in its cargo bay was the powerful Hubble Space Telescope, which would become the most successful of its kind. Quite literally, Hubble has caused the astronomical community to rewrite the textbooks.

However, it is possible that its reign has ended. On June 13, a crucial component that operated the telescope stopped working. The instrument automatically placed itself in safe mode and it notified NASA operators of the situation. The operators have tried valiantly to fix the wayward computer, but they failed. As of this Wednesday, the Hubble Space Telescope is not operational.
Hubble has peered to great distances, seeing the most distant galaxy ever observed — one that formed 400 million years after the Big Bang, a mere 3% of the universe’s current age. At closer distances, it has photographed hundreds of thousands of ancient galaxies that formed long before the Earth even existed — each galaxy a vast and thriving stellar metropolis, where hundreds of billions of stars were born, lived their lives and died. These galaxies existed nearly ten billion years before the Earth existed.
The Hubble Telescope discovered moons orbiting Pluto and it proved that almost every galaxy has a supermassive black hole at its heart. It has even helped create a vast three-dimensional map of dark matter — a substance that can’t be seen and the existence of which we can only infer through precise astronomical measurements of ordinary matter. By any measure, the Hubble Space Telescope is a singularly successful instrument.
The failing piece of hardware is called the payload computer and it is used to control and coordinate the scientific instruments and make sure that they are working nominally. Initial diagnostic tests suggested that the problem was with a deteriorating memory module, but the computer failed to operate with a backup module, suggesting that the issue is more serious. There is another computer onboard the telescope’s platform and NASA operational personnel have tried to use it. However, they got the same error when they tried.
Nevertheless, one should never discount the ingenuity of the people who design and operate spacecraft. For example, in March 2020 a glitch in the Voyager 2 deep space probe caused it to shut down, but after a little over a week, NASA engineers fixed the glitch. Voyager 2 is currently so distant (11.5 billion miles, or 18.5 billion kilometers) that it takes 34 hours for a command to reach the craft and a response to return to Earth. By way of contrast, the Hubble Space Telescope orbits only about 300 miles above the Earth. That greatly simplifies the engineers’ efforts.
The Hubble Space Telescope hasn’t always functioned flawlessly; indeed NASA sent the Space Shuttle up to service it five times, most recently in 2009. However, with the retirement of the Space Shuttle in 2011, a traditional repair mission is not possible. If it turns out that a repair mission is needed, it would require a space craft designed with the capability for astronauts to leave that craft in mobile space suits to access the electronics controlling the Hubble. Such a mission would take years to plan. 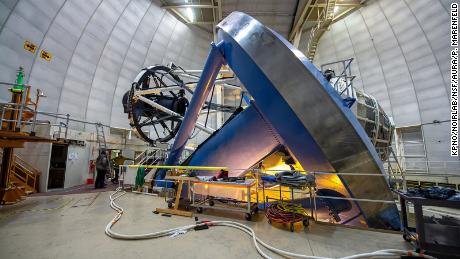 It’s too soon to accept the demise of the Hubble Space Telescope. As I said, the telescope’s operational staff are both talented and clever. But this could be the end of Hubble’s story. Would that be a disaster to modern astronomy?

The answer is both yes and no. Astronomers have relied on the instrument for about 30 years. It has generated scientific data leading to countless papers and also gorgeous images that have transfixed the science-interested public. In that sense, an inoperable Hubble would be a devastating loss.
However, there is good news on the horizon. A replacement for the Hubble has long been in the works. This new instrument is called the James Webb Space Telescope (JWST). In many ways, it is a superior instrument to Hubble. Because of a hundred-fold increase in power and the new telescope’s ability to better see infrared light, it will be able to peer farther back into the past. Hubble has imaged objects that existed 400 million years after the Big Bang, but JWST will be able to see objects 200 million years after the universe was created. That is the era in which the first stars began to burn and, under ideal conditions, JWST might be able to image individual stars from that early time.
Of course, the JWST has had a checkered past. It was originally scheduled to be launched sometime between 2007 and 2011. But construction interruptions and changes in the design resulted in a series of delays. However, 2021 is perhaps the year. The telescope’s mirror and instrumentation are coming together and NASA currently states that the JWST launch date will be sometime after October 31 of this year. With that date just months away, an operational JWST could soon be a reality.
JWST will have other exciting capabilities, like the ability to directly detect atmospheres around alien worlds and to image the birth of both stars and planetary systems.
Unlike Hubble, JWST will not orbit the Earth. Instead, it will be orbiting a location called the Lagrange point #2 (L2). Draw a line from the Sun to the Earth and go about a million miles farther (1.5 million km) and that’s where you can find L2. At such a large distance, repair missions are not feasible. Combined with the $10 billion price tag of JWST, NASA is taking all precautions to ensure a successful launch. The JWST costs are comparable to Hubble’s, when adjusted for inflation.

Any reports of the demise of the Hubble are still premature, but the recent glitch causes the stomach of astronomy buffs like me to lurch a little. I would miss the constant stream of gorgeous astronomical photos. But the prospect of an operational JWST is exhilarating to those who love the night sky.

The best-case scenario is one in which both are operating, and we must wait for those clever engineers to work their magic to see if that is possible.