The SpaceX drone ship, Of Course, I Still Love You (OCISLY), has arrived in the Panama Canal. It reached its destination ten days and one unforeseen detour after departing Port Canaveral, Florida, for what could be the last time ever.

In his Twitter account, Gavin Cornwell of SpaceXFleet said that the 5000-mile (8000-km) journey began almost precisely on June 10th. The drone ship OCISLY was towed to the Bahamas – an unexpected turn of events. 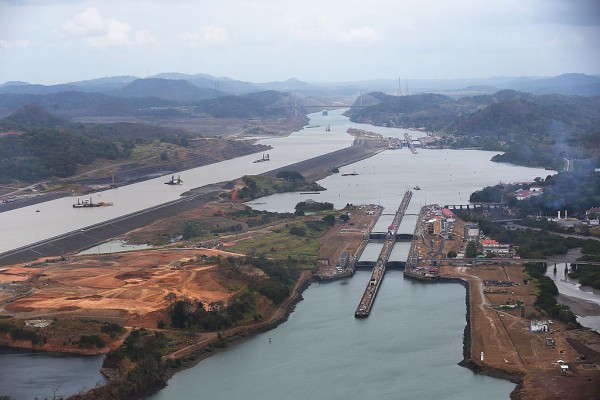 Unlike its twin, the drone ship Just Read The Instructions (JRTI), which did the same journey in reverse roughly a year and a half ago, OCISLY was placed onto the deck of the Mighty Servant 1, a massive semi-submersible transport ship (MS1). A SpaceX drone ship, while still massive, is a featherweight load in comparison to the ships and oil and gas equipment that often weigh tens of thousands of tons.

When Exactly Did SpaceX Ship OCISLY?

MS1 and OCISLY have just been waiting their time, one in a queue of about 70 other huge ships, since their June 20th arrival just outside the canal’s protected harbor. It is unclear how long the SpaceX drone ship will have to wait to pass through the canal and begin the final leg of its journey to the Port of Long Beach, California.

The Panama Canal Authority needs special approval to (slightly) exceed its standard size limitations due to the huge proportions of MS1’s droneship cargo. The narrow margin of error for this specific transit — only a few feet (one meter) between OCISLY and the canal walls — may necessitate extra caution and a longer route than usual. In other words, SpaceX could have to wait days for a unique window, or its transit window could have already been arranged within a day or two of its arrival, thanks to its one-time wide-load transit authorization.

The second option is more feasible, and Mighty Servant 1 might arrive in the Pacific Ocean as soon as Wednesday or Thursday. As of Monday, last-minute transit slots were still available for Friday, June 25th, showing that the Panama Canal is not extremely congested. Spaceflight Photojournalist Pauline Acalin shared a photo on her Twitter account and claimed that Long Beach, CA, will soon be welcoming SpaceX’s OCISLY.

Long Beach CA will soon be welcoming SpaceX’s OCISLY, currently making her journey from Cape Canaveral FL. No activity here at Pier T as of yesterday, but ohhhhh there will be. pic.twitter.com/6srBjFIwpR

MS1 and OCISLY will have roughly 3300 miles (5300 km) to go to Port of Long Beach, the drone ship’s new home, once they complete their passage and reach the Pacific. If Mighty Servant 1 maintains its outstanding average speed on the final part of its journey, the trek from Panama City to Los Angeles might be completed in under ten days, with an arrival in the first few days of July. After that, SpaceX would have several weeks to inspect the drone ship and prepare it for its maiden West Coast booster retrieval.

Check out more news and information on SpaceX on Science Times.