For the DEMO reactor (DEMOnstration Power Plant) to be able to demonstrate the commercial viability of nuclear fusion during the 1950s, it is essential that technicians solve several challenges. One of the largest consists of develop materials that will need to be used in the construction of the DEMO nuclear reactor. This is the challenge facing the IFMIF-DONES (International Fusion Materials Irradiation Facility DEMO-Oriented NEutron Source) project.

The other great stumbling block that this way of obtaining energy presents us requires that we find a way to stabilize plasma which acts as a fuel to prevent it from degrading the mantle, the vacuum chamber and other components of the reactor. Achieving this without reducing the performance of the nuclear fusion reaction is not easy, especially if we bear in mind that the interaction between the deuterium and tritium nuclei contained in the plasma takes place at a temperature close to 150 million degrees Celsius.

Stabilizing the particle soup that contains the plasma at 150 million degrees Celsius without degrading the reaction performance is a real challenge.

Currently several research groups are working in this area, and they are tackling it using several different strategies. One of the most interesting recent discoveries invites us to be moderately optimistic because the ionized helium-4 nuclei that result from the fusion of the deuterium and tritium nuclei, together with the neutron that is thrown towards the walls of the container with an energy of about 14 MeV, have a stabilizing effect on the peripheral zone of the plasma.

A group of researchers from MIT has also made a very interesting contribution in this area. He proposes to use in the reactor magnets a new superconducting material known as YBCO (Yttrium-Barium-Copper Oxide) which combines yttrium, barium and copper oxide, and which seeks to generate a magnetic field significantly more intense than that produced by conventional magnets. And just a few days ago, MIT, Princeton and other US institutions surprised us with a joint contribution that aims to make a difference in plasma stabilization strategies.

The models with which the researchers work show that an effective way to prevent the very high temperature of the plasma from damaging the mantle, which is the interior covering of the vacuum chamber, and, above all, the divertor, which is the steel structure. and tungsten shaping the base of the vacuum chamber, consists of refrigerating its outer layers. The problem is that it is not easy to do this without significantly degrading the fusion reaction that takes place in the gas core.

The Super-H mode proposes to increase the temperature and the pressure in the outermost layers of the plasma to cause the energy production in the inner region to be greater. But doing so requires refrigerating the gas zone closer to the divertor. Researchers have tried to do this by injecting gases into the plasma that exert the desired cooling effect, but have run into a problem: these gases end up being transported from the outer region to the core of the gas, and the reaction performance is noticeably degraded. 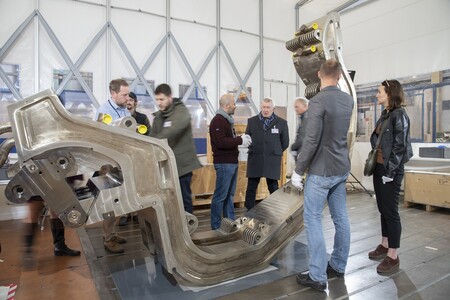 The huge component that we can see in this photograph is just one of the 54 identical pieces that make up the base of the reactor’s vacuum chamber. The divertor withstands the bombardment of high-energy neutrons from the plasma, transforming its kinetic energy into heat.

Fortunately, a few days ago they reported that they have found a very promising solution to this challenge, which consists of inject nitrogen into plasma, acting simultaneously on the magnetic field generated by the magnets of the reactor to control the shape of the gas and attenuate its impact on the divertor. This strategy has a cooling effect on the periphery of the plasma without significantly degrading the performance of the reaction in the gas core.

Those responsible for ITER have received this news with open arms because this approach can have a very positive impact on the development of the nuclear fusion reactor that is being built in the French town of Cadarache. However, it is likely that commercial fusion reactors that, in theory, will arrive after DEMO, combine several of the strategies stabilization of plasma that we have talked about in this article. And, perhaps, some more that is possibly yet to come. Nuclear fusion follows its course with a clear purpose: to face its commercial foray in the 1960s.