UPDATE – The Saturday night launch was scrubbed due to cloud cover in Bermuda. Another attempt will be made Sunday, May 26.

After several scrubs, NASA’s launch of a suborbital sounding rockets from Wallops’ Flight Center on the Eastern Shore is a go for tonight, Saturday, May 15, starting at 8:06 p.m.

The rocket itself, followed by green and violet vapor clouds, should be visible along much of the East Coast. 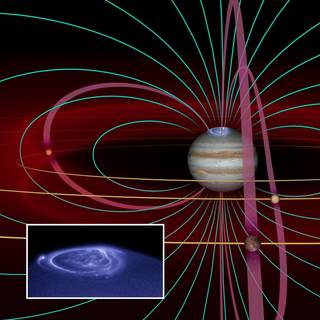 The interaction between Io’s atmosphere and Jupiter’s space environment leads to an Io-induced auroral spot in Jupiter’s atmosphere.

For example, auroras. Auroras are formed when particles in the Earth’s near-space environment interact with the atmosphere.

“The electrons in Earth’s space environment and in the solar wind have relatively low energies.  Yet the aurora is generated by very high energy electrons.  What is the energization mechanism?” said Peter Delamere, KiNET-X principal investigator from the University of Alaska – Fairbanks.

Another example of energy and momentum transport is the Io-Jupiter interaction.

Io is the most volcanically active object in the solar system and has a tenuous atmosphere.  The interaction between Io’s atmosphere and Jupiter’s space environment leads to an Io-induced auroral spot in Jupiter’s atmosphere.

“We know the power generated by Io’s interaction, and we know the auroral power from the spot, but how are energy and momentum transported along the connecting magnetic field line?” said Delamere.

KiNET-X is like a mini-Io.  Two barium vapor clouds emitted from the rocket’s payload will generate a magnetic field perturbation, and electrons are likely to be energized.

“This is a very simple experiment with known input parameters that will allow us to quantify the flow of energy to the electrons.  It is possible the KiNET-X payload will generate auroral emissions on a very small scale, but that is an unknown aspect of this experiment.  In-situ instruments will, however, measure the energized electrons directly,” he said.

In addition, specialized cameras in Bermuda and on an aircraft will be used to observe the interactions.

The KiNet-X experiment consists of a single rocket launch carrying seven separable payloads.  Diagnostic instrumentation is carried on the main payload and four small subpayloads, while the barium vapor clouds will be released from two additional larger subpayloads.

This allows for a multiple-point view of the disturbances created by the barium vapor releases.  The four small subpayloads, nicknamed “Bobs”, each about the size of a two-liter soda bottle, make measurements of the space environment through which the barium-vapor-induced disturbance travels. 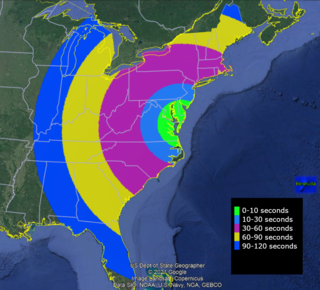 This map shows when the rocket may be visible after launch from NASA’s Wallops Flight Facility. Two vapor clouds will form north of Bermuda about 9 minutes and 30 seconds after launch as part of the mission and may also be visible from eastern United States and Bermuda.

The barium vapor, which is not harmful to the environment or public health, is not expected to form highly visible colorful clouds common to past missions from Wallops using vapor tracers.

The vapor will be released approximately 9 minutes and 30 seconds to around 10 minutes after launch at about 217-249 miles altitude over the Atlantic Ocean and 540-560 miles downrange from Wallops and just north of Bermuda.

After exposure to sunlight the vapor clouds quickly ionize and take on a violet color.  Immediately after release of the vapor, the spherical clouds are a mixture of green and violet, but that phase only lasts about 30 seconds when the un-ionized component of the cloud has diffused away.

The ionized portion of the cloud becomes tied to the magnetic field lines and diffuses parallel to the field lines but not perpendicular to it.  In the mid-Atlantic region latitudes, the field lines are inclined by about 45 degrees to the horizontal, so the violet clouds stretch out in a slanted orientation and look more like short trails than a cloud.  Because the motion of the neutral portion of the clouds is not constrained by the magnetic field lines, they spread out more quickly and become too thin to see with the naked eye much sooner than the ionized component.

In general, the human eye does not see violet colors very well in darkness. The KiNET-X clouds will therefore be more difficult for the casual observer to see than some of the previous vapor missions.

Live coverage of the mission will be available on the Wallops IBM video site (previously Ustream) beginning at 7:30 p.m. on launch day.

The NASA Visitor Center at Wallops will not be open for launch viewing.